The X800H series is one of Sony's most affordable TV lines, but there's still a lot here to feast your eyes upon. With high-powered image processing, the 75" XBR-75X800H delivers clearer, more vibrant 4K images than most value-priced TVs can produce.

This TV supports the HDR10 format, which is a requirement for Ultra HD Blu-ray movies and streamed 4K content. And new for 2020, Sony has equipped the X800H Series to also handle the more sophisticated Dolby Vision® format. This dynamic system adjusts brightness and color levels in response to the video signal on a scene-by-scene basis for rich detail and color.

You also get Sony's 4K HDR Processor X1™ which analyzes the color in individual objects and adjusts the contrast accordingly. When objects are remastered individually, you get greater depth, rich texture, and a more realistic picture. 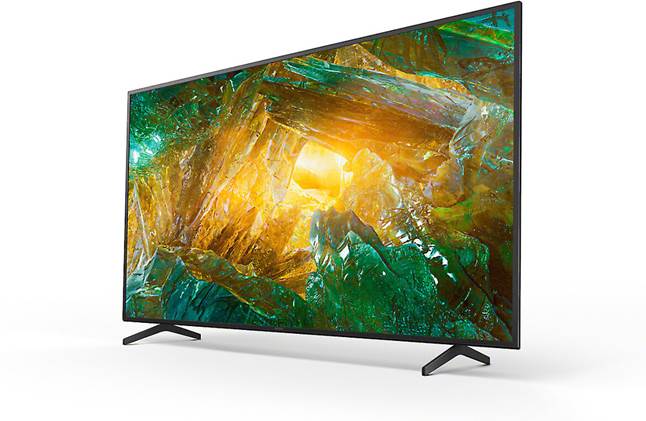 See natural color and real-world detail in all your content with Sony's XBR-75X800H.

I have a comparable Sony 4K TV from a few years ago, and it has Sony's unique TRILUMINOS display technology. This system accurately reproduces a very wide palette of colors. Most anything we watch on it looks great, but fresh, bright uniforms on the green of a soccer pitch or baseball field especially stand out.

But I'm excited to see the improvements offered by the updated processor in the X800H series, especially the Super Bit Mapping feature. This processing breaks up the solid bands of color to create a smoother gradation between shades. That means this new model will be less likely to suffer from the color banding I sometimes see on my older TV, during sunset scenes, for example.

Waiting for streaming apps to load can be a drag. So it's good news that Netflix® starts three times faster on the XBR-75X800H than it does on my TV from 2016. And switching between apps is faster, too.

And speaking of apps — the Android TV™ platform has ‘em all. Okay, it has about 5,000, which is more than any other Smart TV platform. Netflix has a dedicated button on the remote, but the rest can be easily accessed from the App button.

I regularly use Chromecast built-in to cast shows from the HBO app on my phone to my TV. But I'm excited to see that a future firmware update for the X800H Series will add Apple AirPlay® 2 and HomeKit compatibility, which was previously only available on the higher-end models. That will make it easy to stream audio and video, or just mirror the screen from your Mac®, iPhone®, or iPad®.

Built-in Google Assistant — activated with the mic button on the remote — lets you adjust the volume, change channels or inputs, and control other basic TV functions with your voice. That handy button can also help you do all the normal Google Assistant stuff like set timers, provide a weather forecast, and control connected smart home devices. Already have an Amazon Alexa device that you love? This TV is also compatible with Amazon Alexa voice control assistants.

What's in the box: